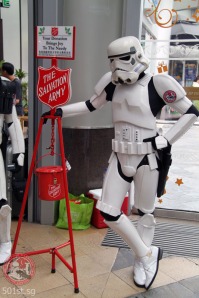 Christmas is around the corner once again, so TK8315 has been called to duty in aiding the Salvation Army amass funds to give the needy and spread some Christmas joy.

That's the kettling bell I'm holding in my right hand by the way.

And on the 5th of December joy was brought not just to the needy, but to the lucky commuters and shoppers passing by the escalator entrance at Raffles city Shopping Centre who stopped to snap a few once-in-a-lifetime photos with these rarely-seen troopers. 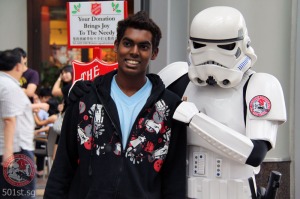 On behalf of the Salvation Army I give salutations to the very generous people who dropped tokens of generosity into the SA’s Red Kettle, more so to those whose hearts as comparatively large as their wallets, whom I noticed dropping ten dollar notes and even fifty dollar notes into the kettle. Merry Christmas, and may the Force be with you all. 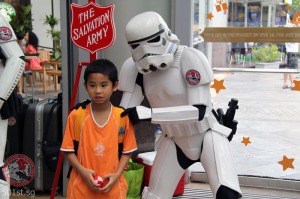 This trooping event marks the very first time I carried a toddler in my arms in Stormtrooper armour. He was light, and I was more concerned that my armour parts might be poking him.

Credits go to our resident bounty hunter (who was off-duty that day) for photographing the event, and my sergeant TK8315, the benevolent droid hunter, for providing the camera and that extra trooper cameraderie. 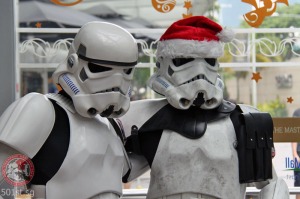 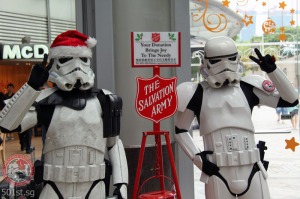 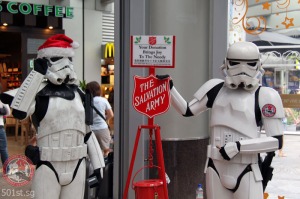 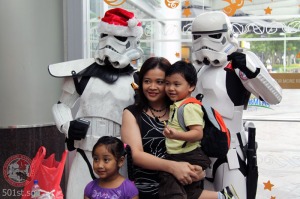 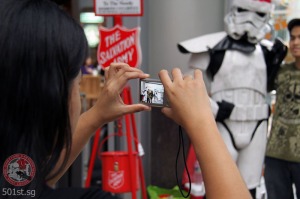 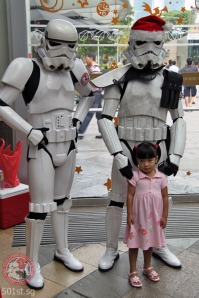 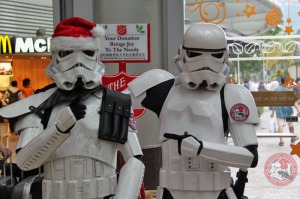 The sergeant and the recruit

Just if you’re wondering, I actually am getting my own Christmas hat, very soon. Expect to see me wearing it as we near Christmas day. If ever you’re free on a Saturday, drop by the MRT entrance at Raffles City Shopping Centre and support our troops. TK8315, signing out.