Meeting the man Himself…

So I’m here right now at the backseat of my dad’s car, typing this blog post on Notepad while I have a lack of access to a stable Internet connection amidst a pang of heartburn from gobbling a quick dinner, and motion sickness from typing in a moving vehicle. We are currently commuting to the airport, where my family shall bid farewell to my uncle, aunt-in-law and grandmother who had come from the Philippines to visit for a week.

If you don’t know by now, my blood is a mix of 1/2 Peranakan (3/4 Chinese, 1/4 Malay) and 1/2 Filipino (inclusive of 1/5 Spanish). It would just so happen that an aunt on the maternal side is also a Japanese citizen, and that meant I have the rare fortune of an actual Japanese relative, of whom I had the pleasure of entertaining her corresponding visit to Singapore as well (she had flown back just last night). More about my relatives, and ‘me and my Japanese cousin’, later on. Tiny tinge of cous/in/cest alert!

She just so happened to miss tagging along with me to one of the more important events of my life today (more so than my birthday even), a once-in-a-lifetime chance to meet with Blogger maestro Danny Choo, a mna whom I have respected and looked up to for a very long time now.

As usual, I had no access to my mum’s Canon Powershot, so I borrowed my uncle’s Sony Cybershot. It was to my misfortune that his camera happened to be low on battery and memory. That’s okay though, it’s Gordonator to the rescue. Kind sir offered to lend me his super awesome DSLR to snap a few shots of the event.

*Excuse me while I hold back the urge to vomit.*

Danny was an immensely nice guy, no different from his Internet persona. I arrived pretty early (received the complimentary Trexi toy above from the registration counter; not really my kind of thing), a very ‘Un-Singaporean thing to do’ according to Animax manager Gregory Ho, and the man even took off a bit of time preparing his famous Macbook to chat for a short while with me. Kagamin was present too of course.

I was touched to hear that he had remembered me when I introduced myself as AK. To be one out of the many dannychoo.com members to have had an impression on him is saying a lot to me; It was a great confidence boost. I was doubly surprised when he noticed and commented on the ‘lucky go’en (five yen) coin’ hanging off my neck. I have been keeping it as a personal treasure from a Japanese friend of mine, and had worn it today after a very long time, admittedly in vain hope that it would make an impression; unexpectedly it did. I was very glad for it.

*Argh, my head is killing me. I knew this was a bad idea.*

The process began with an address by Animax CEO (?) Gregory Ho, regarding his soopur seekrit plan to utilize the blogs of those who have come to be educated with the way of the dannychoo to promote their very own original anime production, LaMB (here’s where the blogging competition comes in, see? They hid the details in the e-mail that was sent to me earlier). This was the Animax Awards entry from some one or two years ago, by a lazy bum Filipino (that makes me equal to half of this guy, if you know what I mean) which did not win the award but attracted the attention of Animax SEA, who promised some time ago that they were going to blow it up into a full-scale anime themselves. The end product? Webcomics, user-generated content, music videos, advertisements, lots and lots of hype-generating stuff. I expected nothing less from the organizer of this event. He knows how to run his business well. Then there were the usual promos, webcomic features and ads, been there done that. And finally, Danny’s talk managed to get underway.

Indeed, as I am currently engaging in a blog improvement process, this talk came in quite handy in pointing me the right direction, which is of course the dannychoo.com direction. I was introduced to things I’ve never heard of before, like Search Engine Optimization, Affiliation, etc. which I so happen to be only drabbling in. I shall definitely set to work with putting the things I’ve learnt today to good use, in appreciation of Danny’s taking his time to present this talk.

Danny Choo’s presentation skills have improved dramatically since his first live speech in Germany. There was this one post he made regarding giving speeches, and I did notice that he had himself implemented the speech strategies identified in that post, strategies he had learnt from other speakers, into this talk right here. There were the occasional 2D girl breaks, the humour jabs, and the well-known 3D vs. 2D girl poll was thrown to the audience at one point. Very impressive stuff indeed. 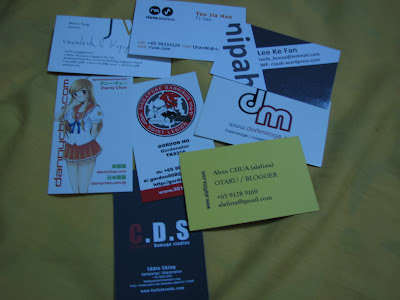 After the talk, the audience of mostly ‘amateur bloggers’ (including me) as quoted by TJHan, were invited to network with each other and exchange name cards. I don’t have a namecard, which is a real pity, but I did manage to retrieve a lot, from Gordon, TJHan, Alafista, Darkmirage, Nipah, Tragic Comedy, Cavalock and Danny Choo himself. TJ even invited me to join him, LianYL and gang for a game of TF2 some day. Heheheh.

I got a chance to take a few more photos, and with Danny’s permission even spent a bit of playtime with Kagamin. She would be the very first Figma I have ever played with. :3 I’m such a noob. I also caught up with the bunch for a good hearty chat about friends, blogs, anime and the works, and promised to exchange links. Yay, moar publicity for me. :3

*Oh shit. Nearly threw up. I could almost taste the foul digestive juices at the back of my tongue.*

You know by now just how I am obsessed with being ‘unique’, don’t you? I didn’t bring a notebook or pen or anything to get his autograph, instead, I brought the right shoulder armour of my Gundam Astray, and a Gundam Marker. The end result? Danny Choo’s autograph on my Astray, plus a complimentary from a rather uneasy Darkmirage. DM is either not very good with Gundam markers, or he’s got a pretty dull signature.

For the record I do not consider Danny Choo as my idol, and I refuse to call myself his fan. Rather, I prefer to think that we are comrades, even though is may be of a higher rank than me. I do not worship him, but I hold him in high regard, and accept that he is willing to extend a warm friendly relationship and even guide me along my path as a blogger. Also, he can do an amazingly convincing LotR Gollum impression, besides the different accents he easily switches around with during his presentation. Respect, brudder.

The talk ended on a rather wet (read: rain) note. After another Animax interview, a group photo of everybody who had stayed behind (thanks for the pic Alafista), and a mad dash for the remaining free food (the only primary reason I attend events like these), we bid our goodbyes and went our own ways. Gordon and I headed down to KKnM (my very first visit there after I relinquished my boycott against them) to pre-order my set of Clannad After Story 2009 calendars. Very nifty place indeed, it’s good everything you’d ever want and more. Even the store owner Sharon turned out to be a very approachable and friendly person. Nice place. I wondered why I abstained in the first place.

Kinda tired right now so I’ll only upload the photos I took with my Cybershot, while I wait for Gordon’s batch of photos to come in tomorrow. Then, another blog post. Bah, how pathetic.

By the way, for all those of you who attended the talk and are still wondering, the codeword is R5D421B. Lulz.

P.S. Yes Panther, I noticed you didn’t come, and I understand why.

*Yes, Terminal Three! Now to get me some free internets, and a sink to puke into.*

7 responses to “Meeting the man Himself…”